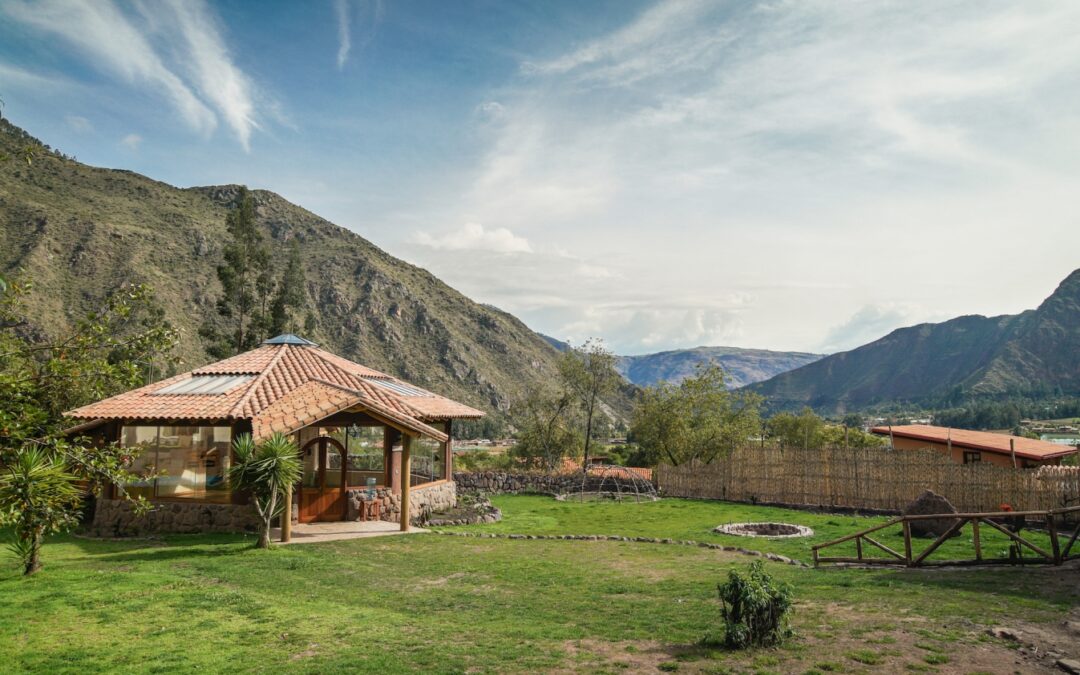 Tears of liberation in Peru

Tears of liberation in Peru

In Peru, everything is magical anyway. All the time. Every faraway view, every breeze on your face, every ray of sun on your skin feels mystical and imbued with a deeper meaning. This is a very personal story about Peru's special magic.

"It was only when I discovered mantra chanting that I really became free". I write on my website. This is the place where this discovery took place: Peru, 2018, Yoga Teacher Training ~ I had no idea how much these three weeks would change my life. An endlessly interesting and forever lasting journey began:

The Way to Me

For two weeks I lived here in this very house at the top of the picture. With the holy "Apus", the high mountains in the background. Surrounded by the most beautiful garden I have ever seen until today. A true place of healing. And one evening there was a sweat lodge ritual that I participated in out of curiosity....

Half past five in the evening in Peru

On the evening of the sweat lodge, we all initially sat there excitedly, covered only with our small towels. Shame spread a little in front of the hut built from branches and alpaca blankets. The rustic sweat lodge construction looked like an igloo, except that it got very hot inside instead of icy. The threshold to the small entrance, which consisted of a thick cloth hanging down, was entered with a prayer.

One last, trusting look at Taki, who was to lead this ritual, before I entered. He is a rather short man by German standards, but average height in Peru. He has darker skin and black hair with a few dreadlocks. His look is warm and soft. At the same time he radiates something rugged, close to nature, wild, something organic. I've never seen him with shoes on. Or with a cell phone. Although he was probably just a few years older than me. I guessed him to be in his mid/late thirties, a young guy, then, who lived below the retreat grounds and barely mingled with the "crowd," which consisted mostly of pretty American and European yogi girls. There was something sensual about him and he radiated a special calm. Somehow he saw right through you and in a strange way this led to a deep familiarity. 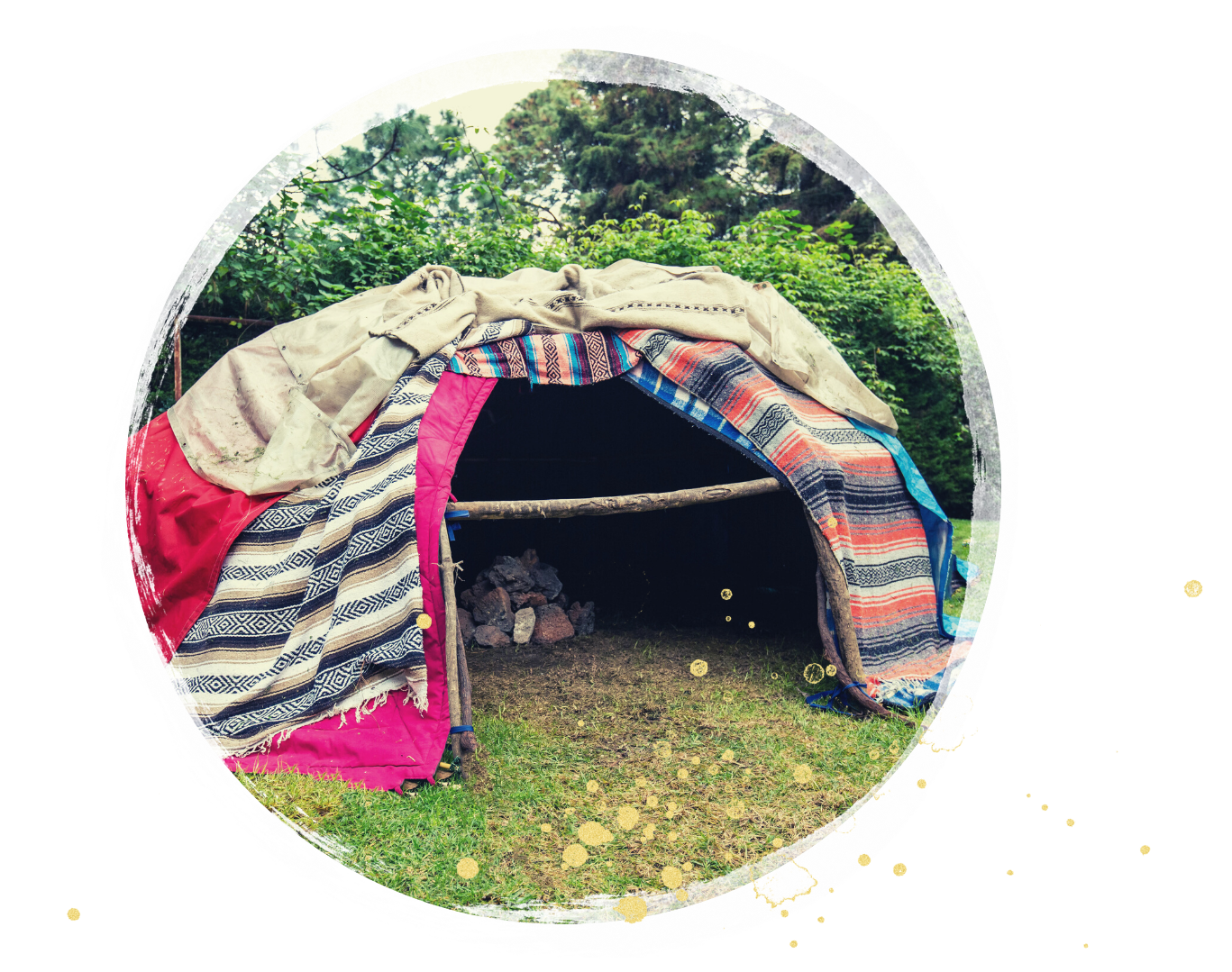 I knelt down in front of the alpaca curtain and thought about the fact that my towel was much too short. It was early evening and already dusky, but still quite bright. I bowed to Mother Nature anyway, "after all, she had created me just so naked, even if half of me is peeking out now," I thought to myself. I said a short prayer of thanksgiving, bringing my hands to my forehead in a prayer position. Then I brought my forehead to the earthy ground and placed both palms next to my temples with my fingers spread. It was as if I wanted to absorb as much of Pacha Mama (Mother Earth) as possible with my fingers.

Finally, I entered the dark circle with the hole in the ground in the middle. One by one we went through this ritual of entering, one after the other, without haste. Clockwise, we sat down on the small ring built of earth along the edge.

Then we celebrated the "hombre del fuego" (the man of fire), who already had a huge fire going about 2 meters from the entrance and was sweating a lot before it really started. We cheered him with drum beats and rattles. He gratefully accepted our praise and yet I had the feeling that he was a bit uncomfortable being the center of attention. He was an important part of the ceremony: preheating the 24 Peruvian volcanic stones, the "abuelitas" (grandmothers), in his giant fire for us. There were four rounds, each with 6 abuelitas shoveled into the center of our hut. One round lasted about 30-40 minutes.

I had great respect for the heat that awaited me. Concerns about whether my circulation would hold out. And at the same time there was this irrepressible curiosity and excitement. After all, I didn't know exactly what was about to happen.

Taki, who led the ceremony with incredible dedication, was the last to enter. We greeted each of the first 6 abuelitas with "Bienvenida abueliata", Welcome Grandmother. As we did so, Taki gradually began to play rhythms on his drum. When the first stones had fully arrived and the temperature had already risen noticeably, the hombre del fuego closed the entrance with the thick alpaca blankets. It was pitch dark and only a glow of the lava stones was visible.

WHEN THERE IS A PHYSICAL SENSATION

THEN FOR ME IT WAS JUST THAT 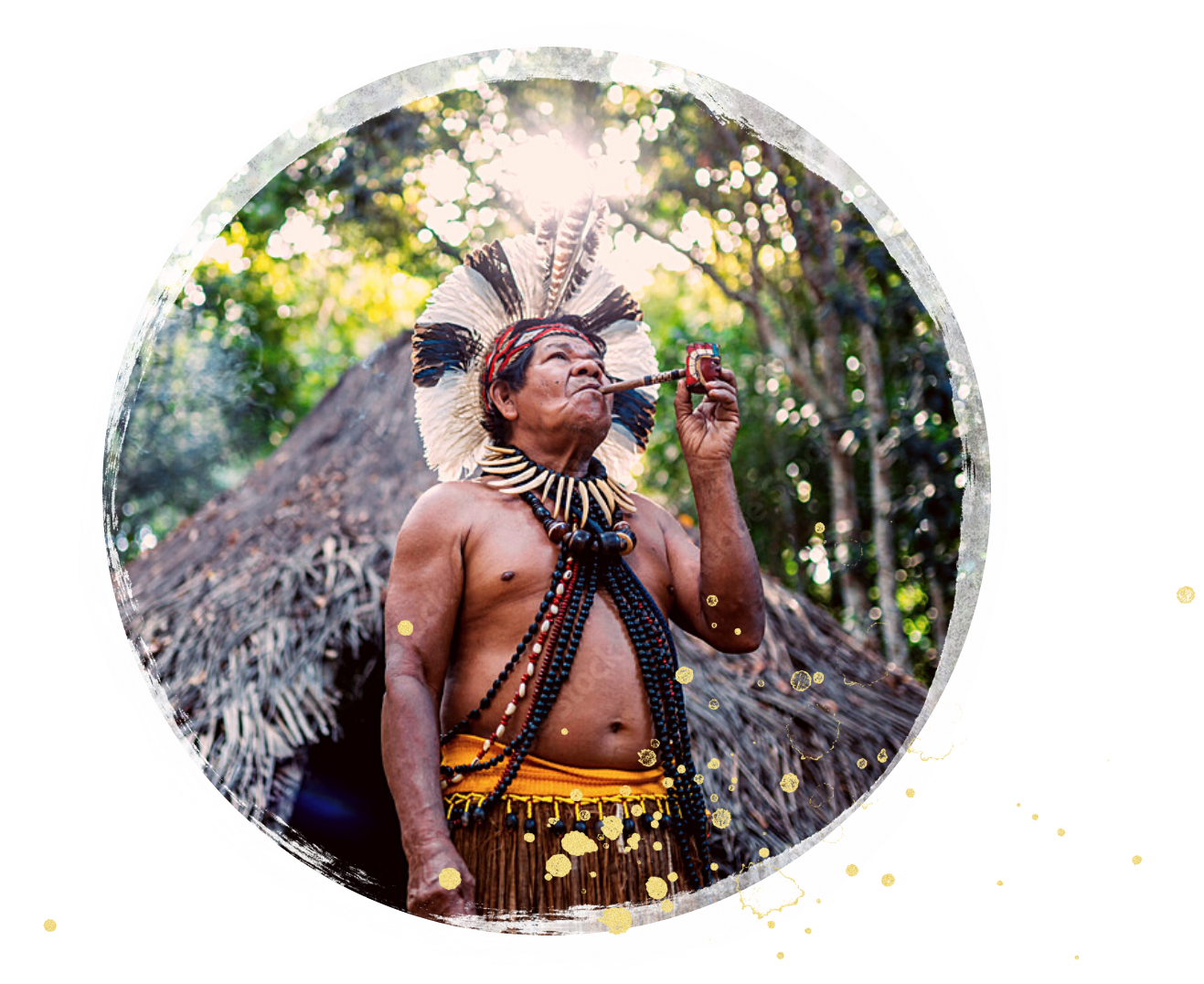 The sound of the soul

Around Taki's drumbeat, his voice gradually nestled. His girlfriend and Jimena, who was something like the spiritual director of the retreat facility, knew the Spanish mantras and joined in with their angelic voices. Quickly we were able to follow as well. Our sacred circle, that protected, familiar space of people with whom I'd been traveling deeper than ever before over the past two weeks, melted into a magical mass of rhythm. We rattled and sang. Breathed deeply in and out, through the heat.

The breeze did infinitely good when the hombre del fuego briefly lifted the blankets in front of the entrance hole to hold out the shovel with the next abuelita to us and gently place it with the others in our midst. Six times we called again "bienvenida abuelita".

And again, new melodies and new, beautiful Spanish words impacted my soul. The songs described Mother Earth, how we belong to her, are all connected. How she nourishes us. It was about the elements, fire, water, earth, air. About the ether. About the heart. We sang about love. Sometimes I didn't really understand the lyrics, I just let myself be carried away. 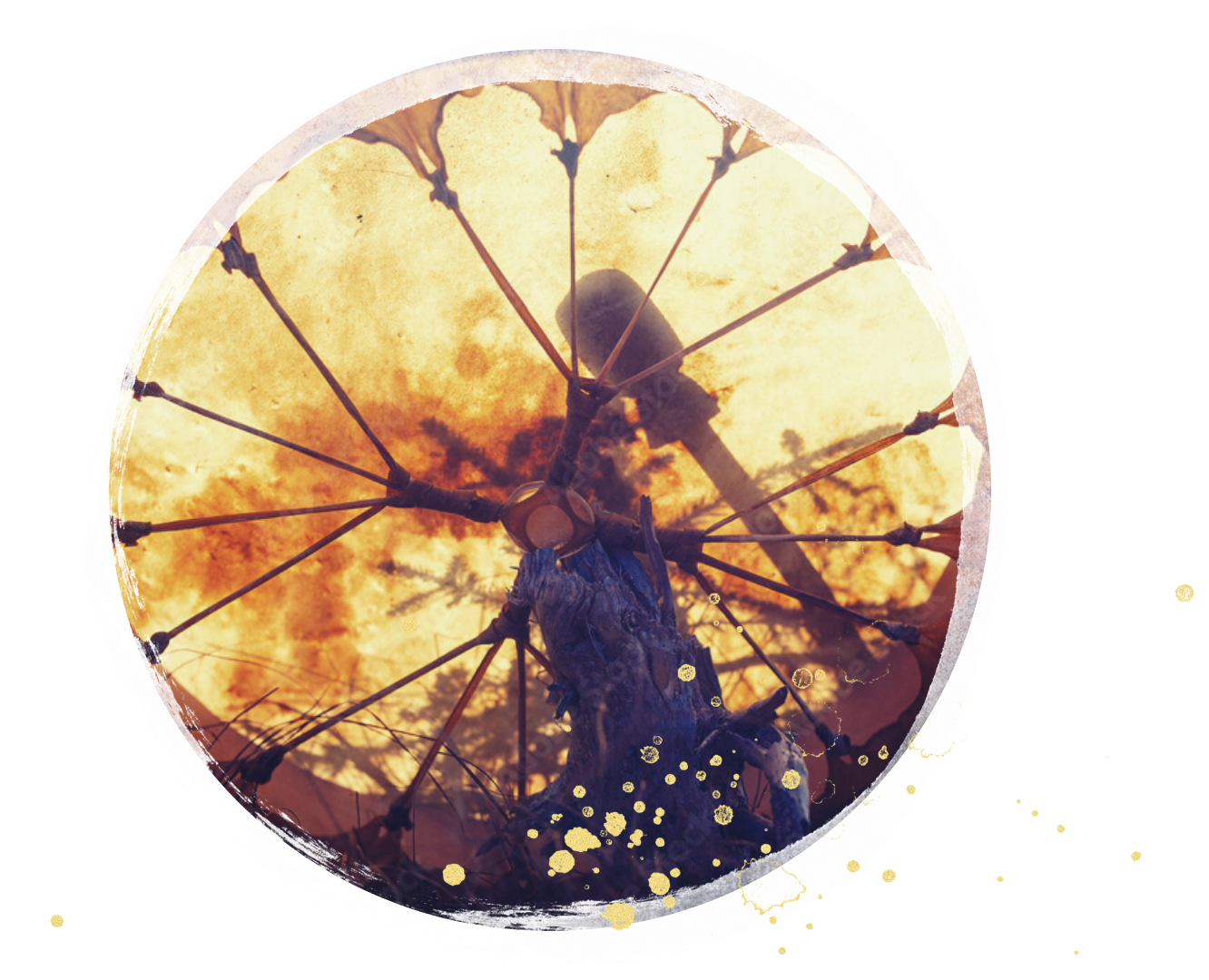 As of now, I can only give a hazy account of what exactly happened. It is important for me to mention that no drugs were part of this ceremony. All that put me into a kind of trance was the heat, the music and my breathing.

Our singing as a group got louder and louder. We stuck to a tune that felt good. Taki called out a word to the group. I don't remember what. Something like compassion or connectedness. By now we were all moving our sweaty bodies in a sitting position as much as space allowed.

We were about 15 people in a circular hut with a diameter of maybe 3 meters. By now I didn't care about the sweat of the others and my own. I continued to hum and sing to the drumbeats. Someone else from our circle now suddenly also shouted a word in the middle and a song arose from Taki's melody and courage-giving, liberating words, which were shouted out with body and soul. And at some point this song, which formed as if by itself, reached a kind of climax where all the drums gradually got louder, all the voices sang louder and it got really hot.

Suddenly I felt tears cooling my cheeks. How my heart pounded loudly

How something inside me wanted to scream. I felt a feeling wanting to come out through the tears in my eyes. And I gave it free rein. I howled loudly, sobbing and gasping for air. I don't know for how long, but it was for as long as it took. My loud whooping was completely lost in the singing voices and music of the others. But I didn't worry about that at that moment. I just let it happen. I let go of everything. Even my towel. I can't remember when or if I've ever consciously cried so hard. And there wasn't just release. There was also something dark, something very painful. There was a shadow that I let surface from the inside.

To my surprise, the heat remained bearable even in the third round. I still had enough breath to continue singing and moving. I noticed how my voice now drowned out the desperate shouting, loud laughter or quiet crying of some others. And I just thought to myself "Yes, let it all out, don't be ashamed". By now no one had their towel on either. And when we moved to the music our wet bodies touched each other. So what. We hung on to each other, sometimes took each other's hand or changed our sitting position. We all just sat there as Pacha Mama had made us: free, connected, naked, with open hearts and deeply touched. Even in the fourth round.

The music gently died away. And the hombre del fuego lifted the cloth in front of the entrance. A wonderfully cool breeze on it into the interior. Clockwise again, one by one, we slowly left the hut.

With a bucket we poured cold Andean water from the stream that ran right next to the sweat lodge over our heads. We stood under the shining, crystal clear starry sky in the middle of Peru. Now everything was definitely washed away that no longer served me. At least everything that dared to surface that evening. I felt great. Liberated. Relieved. Filled with joy. 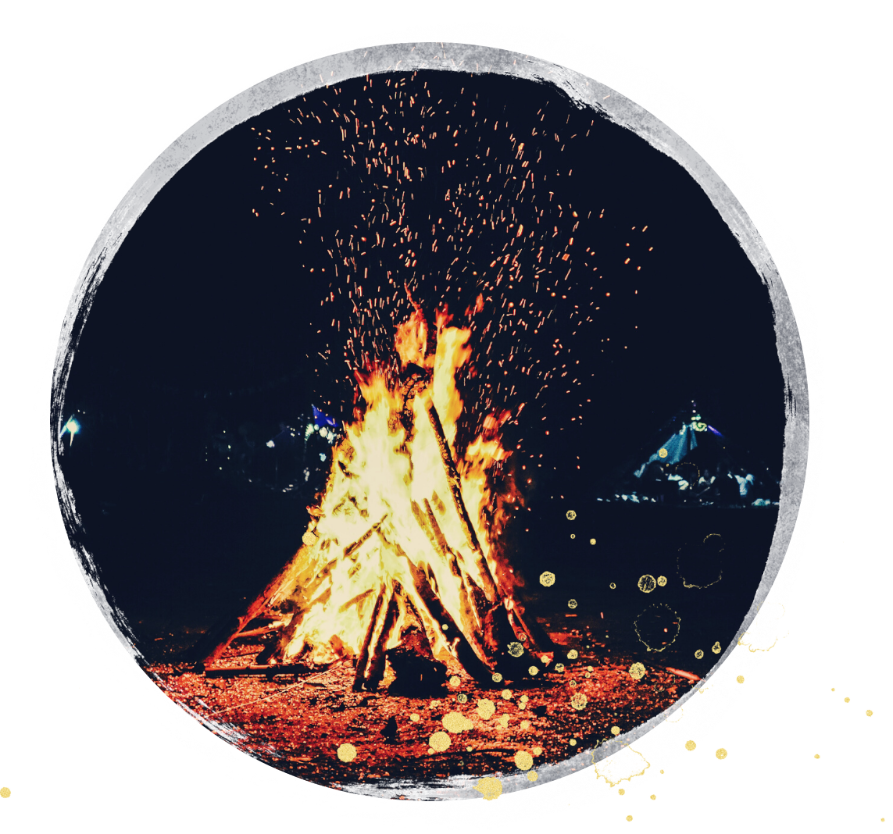 I found my voice that night. I was really loud and it didn't matter how it sounded. The mantra chanting, the shouting of the words, the drums - it had an infinitely liberating effect on me.

Today I believe that on that evening I inwardly decided to speak my truth from now on and to live according to it. What concretely meant that a few weeks later I quit my job, adopted a street dog, now - 2 years later - play the harmonium as a yoga teacher and dare to sing in front of people.

That I found the way to bhakti-yoga through chanting and am now walking the path of the heart.

And when tears come to me today, I try to remember that they are a precious mouthpiece of my deepest inner self and I want to hear them. We all have wounds. And we can be grateful when they move from the inside out to experience healing. Even if it's scary at first. Letting go of something, getting free of a thought, belief, and what we no longer are or need is something this experience has taught me.

~ May all living creatures everywhere be happy and free.

The essence of our retreats & events is to suggest pathways into your glow. They are paths of healing, liberation, self-love and personal development in a yoga-based setting.